Rupert Scott, an architect, lives with wife Leo Wood an interior designer and their daughters Evie and Frankie in this two bedroom Victorian gin distillery conversion in Whitechapel, east London. What started as a ‘dark, dank box with bricked-up windows’, is now a bright, beautiful space with industrial-meets-Scandi vibes. Architect Rupert Scott of Open Practice Architecture had been looking for a site where he and wife Leo Wood could create an exceptional home, when they discovered a dilapidated gin distillery, opposite to where they were already living, had come on to the market.

They could see that it would offer plenty of space for their two young daughters, but having bought the property, it would be more than three years before the family could move in.

‘It was a box with bricked-up windows,’ explains Rupert. ‘Inside, a steel mezzanine divided the space with a lean-to extension along the side. ‘It was a dark, dank, rat-infested shell.’ Reclaimed bricks were used to repair damage to the outside of the original Victorian building. Photo: David Butler

The couple had a number of hurdles to overcome when embarking on their gin distillery conversion, from buying a right of way from the local council and changing the address of the property, to developing a design that was accepted by the local planners. Plus, the original entrance to the building was through a corridor in another commercial building.

‘Bringing in natural light was a big consideration, as was the flats overlooking us on the other side of the building,’ Rupert says.

The first job was to strip the inside of the building back to its bare bones. For Leo, this was one of the high points of the project. ‘Time went so quickly in those first two weeks. Once we got rid of all the rubbish – and there was a lot of it – we realised what a big space we had,’ she says. Polished concrete flooring with underfloor heating was installed in the open-plan living area, with a new metal staircase at the far end leading to the upper level. Photo: David Butler

New windows were punched into the facade of the building, and a steel frame erected inside the space during the gin distillery conversion. Plenty of insulation was packed in as part of the build and additional internal walls went up.

‘We built a new roof, too. The back two thirds of which rises above the parapet, which allows the bedroom windows to look over the top of the original structure,’ says Rupert.

The wedge-shaped property now incorporates numerous outside areas to ensure light penetrates throughout. There’s no big garden, so having these outdoor pockets works well. The open-plan ground floor is divided into zones by the level changes in the ceiling. Rupert and Leo wanted extra height in the living room and thanks to overhead glazing and a full-height Crittall window, this is one of the brightest areas in the property.

Leo enjoyed the gin distillery conversion and renovation process so much that she was inspired to take up a new career in interior design, starting her own business, Kinder Design.

‘It was largely as a result of this project,’ she says. ‘Transforming a rundown space into something beautiful is so exciting.’ A zinc-clad parapet forms the first floor of the gin distillery conversion, projecting upwards from the original roofline of the distillery. The hidden terrace features a panel of glass that allows light into the study below. Photo: David Butler

Timber-clad walls are a key look in interiors, but this striking design feature can also be replicated on the ceiling – from rustic and industrial-style schemes to more decorative painted or stained finishes. In its natural state, wood adds character and warmth. It can help insulate a room, as well as camouflaging old or uneven surfaces.
It also has natural acoustic properties.

Soft woods like pine are budget-friendly, light and easy to work with, but hardwoods such as walnut, maple, teak, cherry and oak are also effective, depending on the look you want. Generally, the wood is fixed on to softwood battens that have been nailed or screwed to the existing ceiling at right angles to the cladding. If you are planning to paint or stain the timber, it is advisable to do this prior to installation. It should also meet any fire and safety regulations. 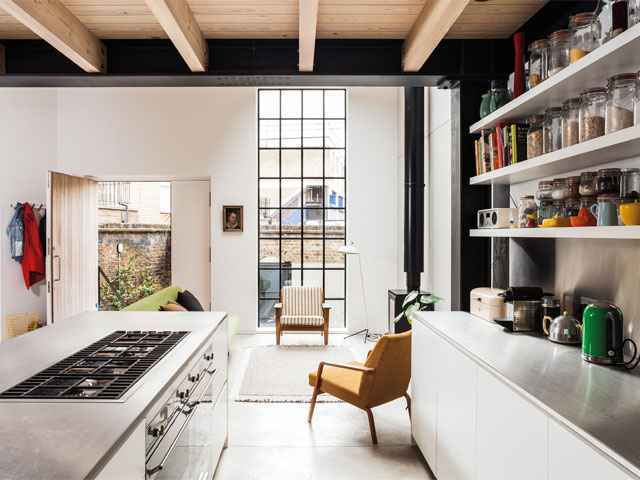