Before and after: Country farmhouse kitchen turned minimalist space

Julie Smart left the past behind when she swapped her country farmhouse kitchen for a modern, minimalist space. 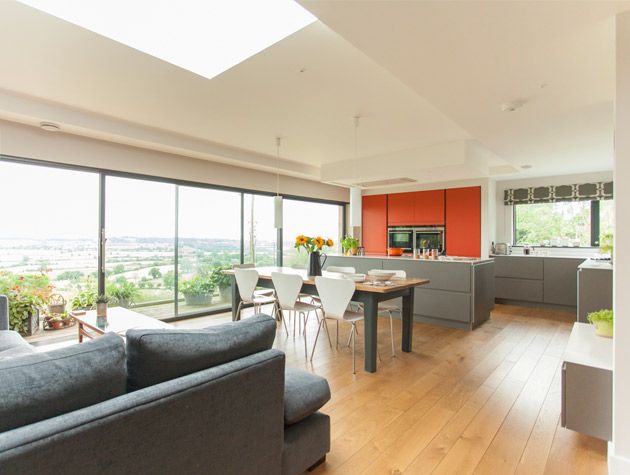 When award-winning architect Martin Smart decided to build a brand new eco-house, his wife Julie knew exactly the type of kitchen she wanted. ‘It was going to be an ultra-modern house, so we chose a Pronorm scheme from Germany. A traditional style wouldn’t have looked right. Besides, we enjoyed our country-kitchen phase in the 17thcentury farmhouse we’d moved from,’ she says.

Back in November 2012, the Smarts bought a run-down Thirties bungalow, high on a hill in south Warwickshire, with stunning views over both that county and neighbouring Northamptonshire. ‘It was all very basic and the kitchen was rather grim, hand-built and very old. All I could think of was how nice the next scheme would eventually be.’

The couple moved in the bungalow but did not intend to stay there for very long. Martin had a clear vision of what would work, so he drew up blueprints and they spent the following eight months waiting for planning permission to demolish it. It took another a year to build the four-bedroom property, which Julie now calls their “upside-down house”: ‘We put the open-plan, kitchen-livingdining room on the first floor, to make the most of the sweeping views,’ she explains. There is now also an additional living space, a study/guest bedroom, a wet room and a separate utility near the kitchen on the same floor, with three bedrooms and two bath/shower rooms located downstairs.

The Pronorm kitchen was recommended to the Smarts by a friend, and they were immediately attracted to its clean lines – ‘doors without handles’, says Julie – and the clutter-free finish it afforded.

At first she did wonder whether the house’s neutral palette with natural materials, such as slate and aged oak floors, with walls painted the same pale grey in every room, might look too cold and clinical. ‘Especially as we chose grey laminate kitchen units and white Corian worktops as well,’ she says. ‘But since adding orange lacquer doors to the cabinetry and splashes of colour via the accessories, it feels really cosy and lived-in.’ An island containing the induction hob separates the kitchen from the living and dining areas. Martin designed the ceiling above it with a built-in canopy to incorporate down-lighters and an extractor. ‘It all looks very neat,’ says Julie. ‘I love the induction hob. It’s fitted flush with the Corian worktop, so it is incredibly easy to keep clean – I just wipe it over.’

The Smarts are not into gadgets and gimmicks, so they have a standard dishwasher and the spare fridge-freezer in the utility room is used as a wine cooler. That’s where the washing machine is kept, too. Any other advantages? ‘Yes, the amount of storage,’ says Julie. ‘Everything has its place, and anything left on display is there because it looks nice.’

In conclusion, she says, ‘It may look ultra-modern and quite minimalist, but because the kitchen is part of an open-plan living area where there is comfy seating with a coffee table and bookshelves, it still feels homely. And, if I’m honest, having done a lot of decluttering before we moved, I like not having lots of “stuff ”around – it only gets dusty!’ Chinoiserie bedding and furniture is the purr-fect way to bring Chinoiserie decor into your interiors in 2022, the Year of ...
Shopping