Step inside this timeless bathroom

A fusion of practical elements along with period details gives Sarah Curran’s bathroom a timeless look. 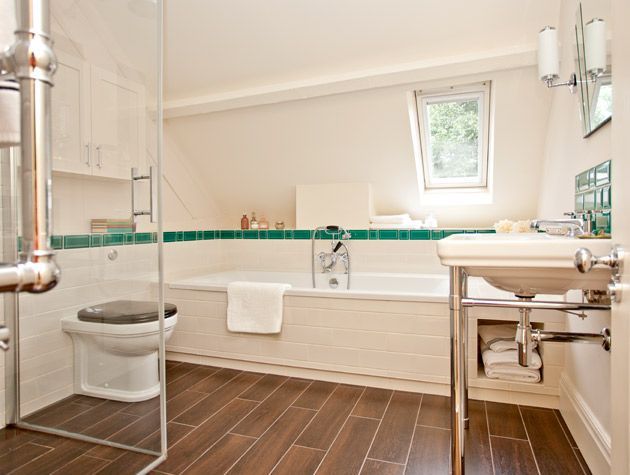 With uneven walls and a sloping floor and ceiling, Sarah Curran’s bathroom in her 16th-century converted coach house had many a builder running for the hills, and it took her and husband, Lee Godfrey, 15 years to finally get it refurbished. Meanwhile, they had three or four unsuccessful attempts to fond a local company to help them re-plan the space. ‘The biggest issue was the sloping floor, which varied by around 10 inches from one side to the other, and no one could come up with a solution to solve it,’ Sarah explains. ‘It was so bad that the cat could squeeze through the gap under the door. Most builders wanted to raise the floor so you had to step up in to the bathroom, but we were convinced there was another way. The house had been badly renovated back in the Eighties and the layout didn’t make sense. The basin and WC were positioned under the sloping roof, where there was limited head height, while a small bath and built-in shower cubicle were squeezed along one wall. ‘You could just tell it was a rushed job,’ says Sarah. ‘I knew that if a bath was placed under the slope there would be room for a decent-sized shower, too. I just needed to find someone who shared my vision.’ The turning point for the couple came when they met Martina Landhed from InStil Design, an Oxford-based company, who suggested levelling the floor with a step inside the room so no one would trip up as they entered. ‘Nothing fazed her,’ says Sarah, ‘even the fact that there wasn’t one straight wall in the entire space.’ As the bathroom would also be used by their two sons, a big walk-in shower was high on their wish list. ‘While I wanted to give it an elegant feel, it had to be practical and not too feminine,’ she adds. The idea for the Art Deco scheme was inspired by wall lights the couple saw in InStil’s showroom, then Sarah discovered the vibrant green tiles that pulled the look together in Fired Earth. ‘They were a little pricey, so we used them just as accent tiles,’ she says. ‘But the mirror was a bargain find – under £50 from Argos.’

It might have taken more than a decade to get the job done, but Sarah is delighted with the result: ‘The men love the power shower and I can lie in the bath looking at the stars. It really couldn’t be better.