Before and after: Bedroom turned bathroom renovation

Sacrificing a bedroom has given Elisabeth Lowery space for a bathroom full of character and charm. When Elisabeth Lowery bought her Victorian mansion block flat in West London, she was delighted, as it was the space she longed for, and within her budget. The only downside was she knew the whole place would have to be completely gutted: ‘It hadn’t been touched in years,’ she says.

However, this wasn’t such a bad thing, as Elisabeth wanted to rethink the layout to make it more suitable for her busy family. It had plenty of space, but was warren-like, with four bedrooms and only one small bathroom. She decided on the radical step of turning part of this original bathroom into a modern shower room, and transforming the remaining space into a walk-in cupboard that could be accessed through the adjacent kitchen. The smallest bedroom would then become a spacious new family bathroom. This plan would give her what she was after: three good-sized double bedrooms and two bathrooms. Elisabeth employed Juliette Sherwood from Sherwood Street interiors to work with her on the project. She had previously visited Juliette’s house and loved her style, so when Elisabeth found out she was a designer, she asked her to come up with suggestions on how to create a similar look.

The former smallest bedroom was narrow, made even more of an awkward shape by an angled wall at its far end. ‘We decided it would make a great spot for a basin,’ she says. ‘The pipework has been hidden behind a new studwork wall, which also created the depth required to integrate a mirrored cabinet that sits flush with the tiles. Guests think it is just a mirror, but it hides make-up and other clutter that a house full of girls typically accumulates.’ Juliette also suggested built-in storage at the entrance, to provide somewhere to keep spare towels and toiletries. This takes some of the room’s length away, making it feel wider and less like a corridor.

Elisabeth has no regrets about sacrificing one of the bedrooms. With the renovation complete, the new layout of the apartment is now much more suited to modern-day family life. ‘The shower room gets used a lot, especially if we are all trying to get ready at once,’ says Elisabeth, ‘and the bathroom is a real pampering space that we like to take our time in. The girls all use it as much as I do.’ 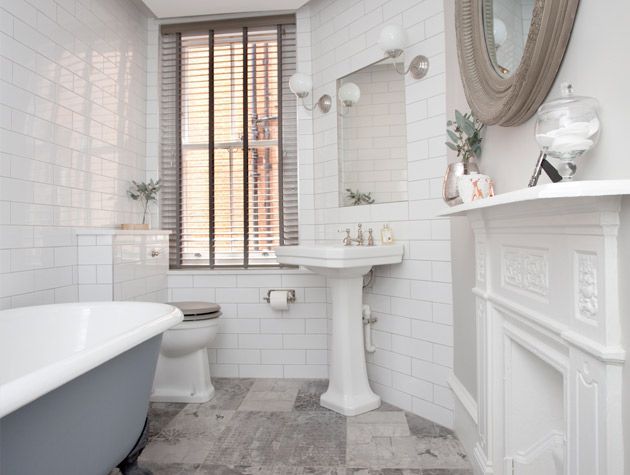